I am glad to report that both recently completed TV series, Railroad Australia on Discovery and Outback Pilots on 7 mate, are rating well. Fingers crossed for a new series of both.

The feature documentary Whiteley has been playing to great reviews. Margaret Pomeranz gave the film her first ever 5-star review on Foxtel Arts.

Whiteley was directed by James Bogle and edited by Lawrie Silvestrin.  The documentary does not have a narrator; instead the story is told through archival footage and re-enactments. We recorded actors reading contemporary newspaper articles and then played the voices coming out of radios, matching the quality to archival sound—something of a challenge.

Ash Gibson Greig composed the music for the documentary, weaving his music around the music of the time. The soundtrack was complicated, so Ash moved his music suite into my studio for the days of the final mix. This gave us the opportunity to tweak the music mix right up to the last moment.

John Simpson of FeetnFrames did his usual great job on the foley, bringing to life the re-enactments and the painting scenes, which were all shot without sound. He managed to bring even the brush strokes to life, making you feel you were at the painter’s side.

This is the outside of Luna Cinemas in Leederville, and I’m happy to say I was the sound designer and mixer on four of these films—Hounds of Love, Whiteley, Bad Girl and Hotel Coolgardie. What a buzz to have all four playing at the same time.

Coming soon, news on Hotel Coolgardie and Hounds of Love. 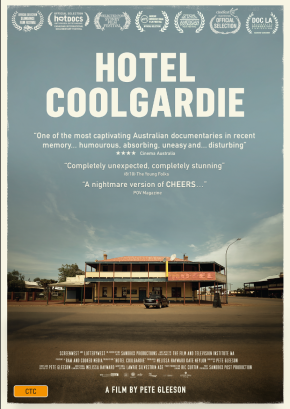